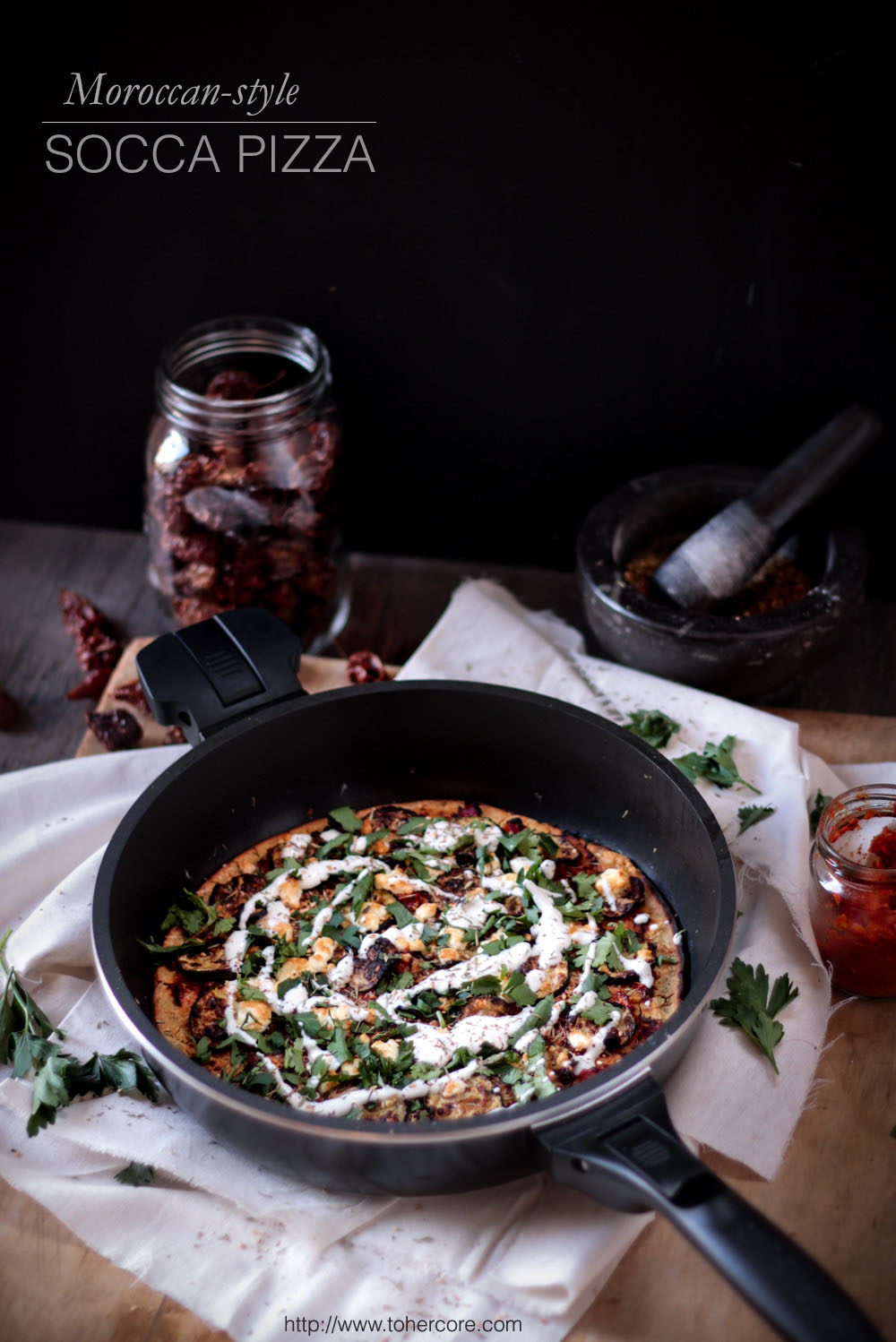 One of my favourite foods would have to be pizza. Growing up in an Italian family, I have fond memories spent in the kitchen with my Nonna who would make her own pizza dough by roughly measuring out flour straight onto the benchtop, making a well in the centre, and then adding water and olive oil. As with most things in my Nonna’s cooking repertoire, everything was cooked and measured by sight, smell and taste. Her food was always amazing, yet I never once saw her open a cookbook. She knew what she knew, and she knew it well.

In my Nonna’s kitchen, pizza was a treat and for me today it still is. I’m not a fan of the Westernised pizza that is topped with way too many toppings and a mountain of cheese. My favourite way to eat pizza is a really good dough, a light smear of homemade tomato sauce, one or two toppings, and a sprinkle of cheese – enough so to cover the pizza, but not that much that it over powers the other ingredients.  Unfortunately, pizzas like that are very hard to come by where I live, and as I am yet to perfect my own dough (albeit a version which proofs for two days – my craving for pizza always seems to be a last minute one!) I have been playing around with other options. 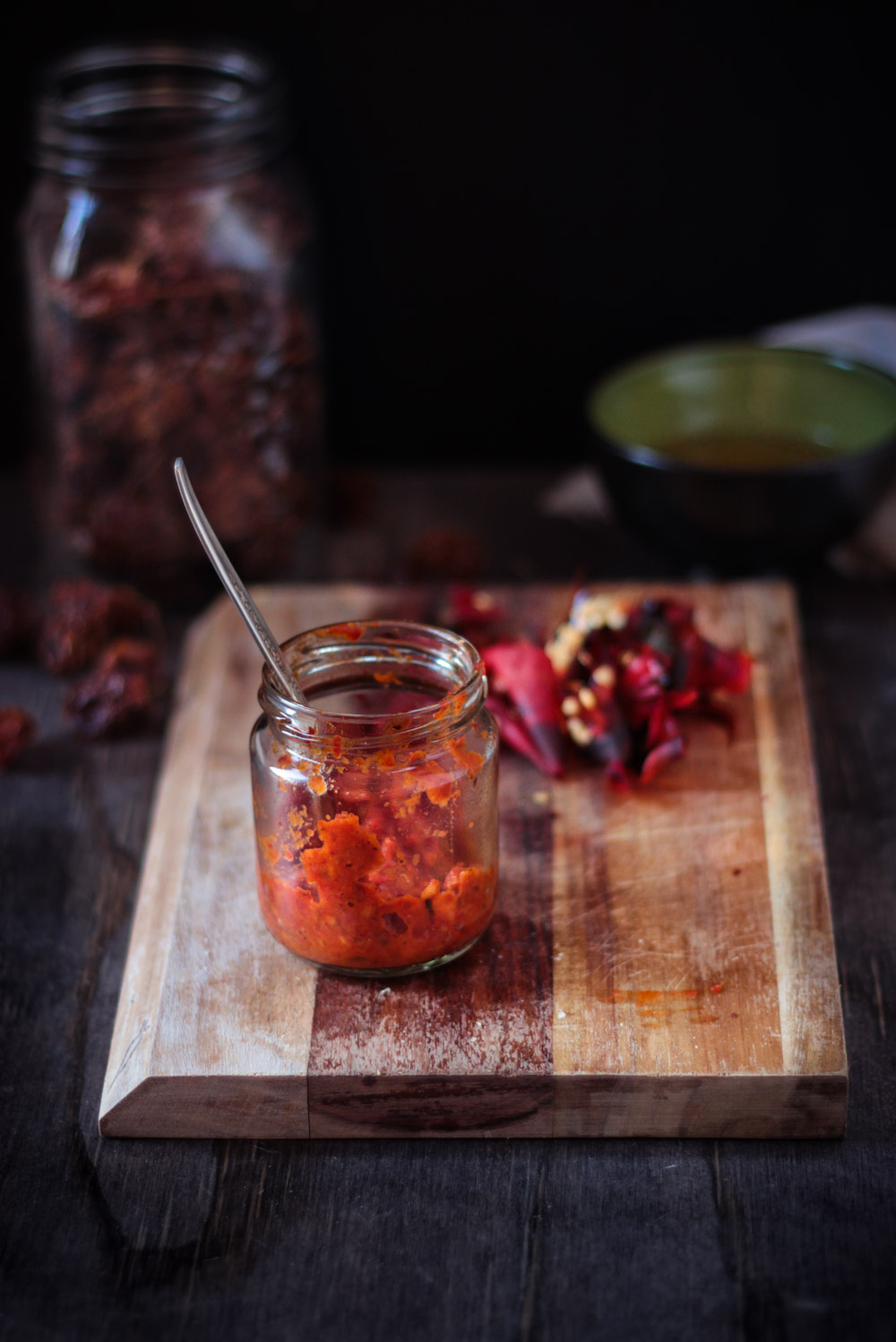 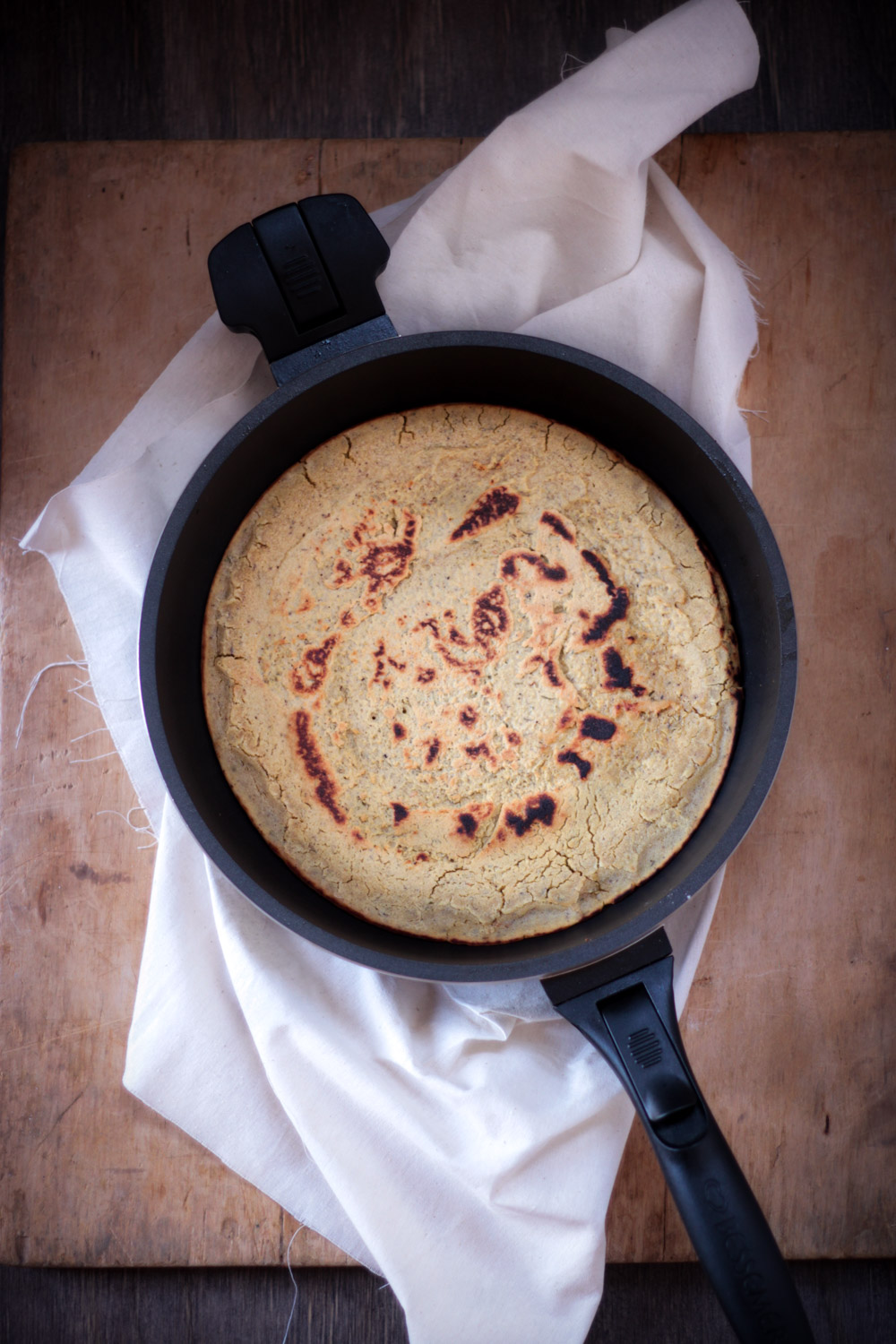 Though not to everyone’s tastes, I do love the broccoli base pizza on here –  it’s nothing like the pizza I grew up looking forward to, but holds its own as a veggie-packed, grain free alternative. I’ve also played around a bit with socca, which is a flatbread native to some parts of Italy and France made from chickpea flour. I have made a version of socca here before, but I really wanted something a bit heartier. Chickpea flour instantly reminds me of middle-eastern food, and therefore I wanted to theme the flavour profile of this pizza along that line. Harissa was the obvious choice for the base, with za’atar spices and a tahini yoghurt drizzle topping off the flavour profile. I used zucchini here as it’s what I had on hand,  but some charred eggplant I imagine would be amazing.

Now – the ingredient process here looks long and complicated, but I assure you it’s not. That said, you could purchase the za’atar spice blend and harissa paste instead of making your own, as well as the chickpea flour – this will drastically cut down your preparation time. But if you do feel game to have a go at making them yourself, you could easily double or triple each to make enough to have on hand for other dishes through the coming weeks. The spice blend will keep a month or two in a sealed container, the harissa will last about two weeks and the yoghurt around 4 to 5 days.

To make the socca bread pizza, you need to pour the batter into a thick pan, cook through, flip and then cook the other side. Alternatively, you could cook it in an oven-proof pan and then transfer to the oven to brown the top under the grill. If you choose to flip and cook on the stovetop, I’d suggest sliding the base out onto a plate, and then placing another plat on top, bottom side down, and flipping over, and then sliding back into the pan – I hope that makes sense, as even though it sounds complicated it’s the easiest way to flip it. Do not try to flip it like a pancake. It will not work. Trust me… ;) 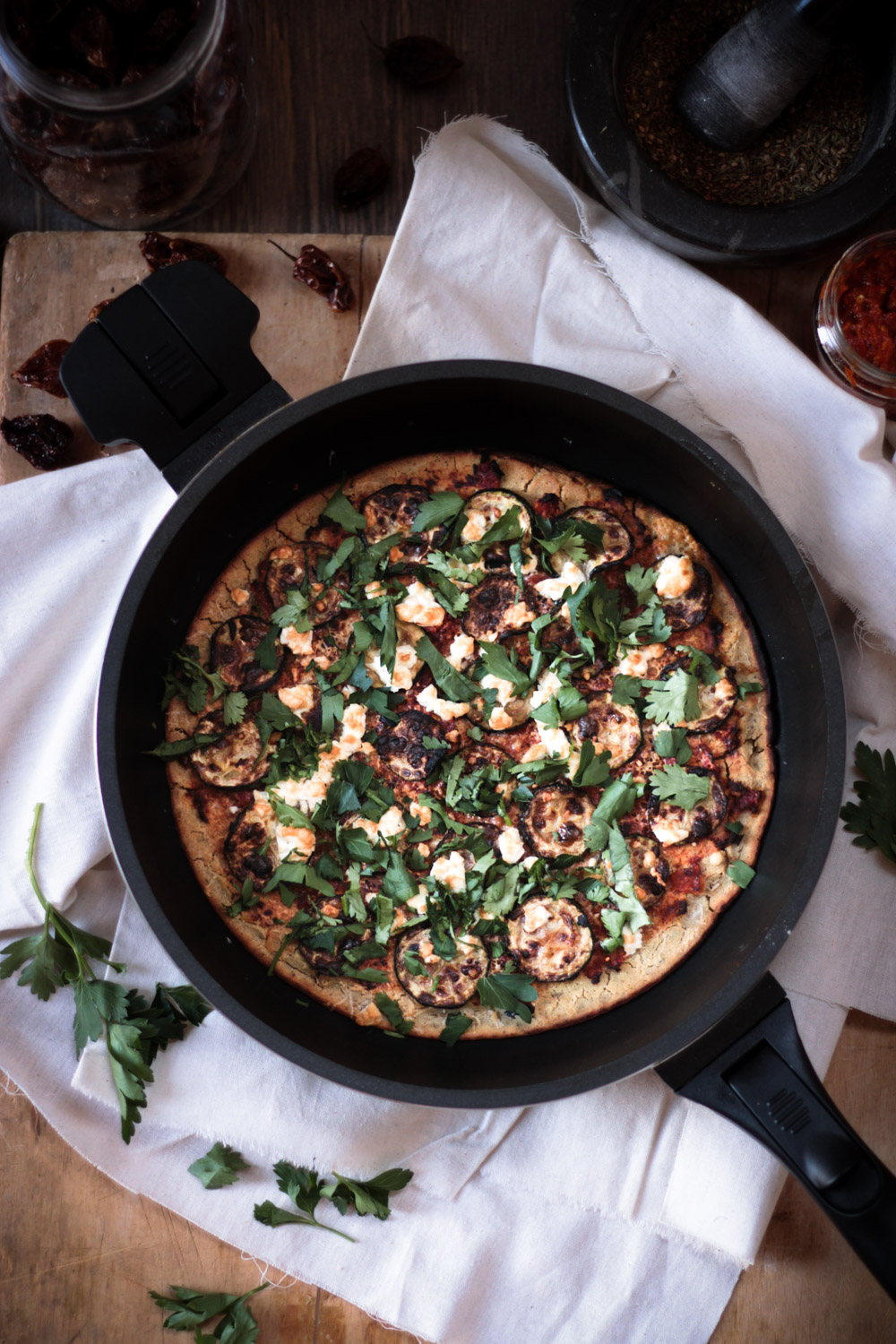 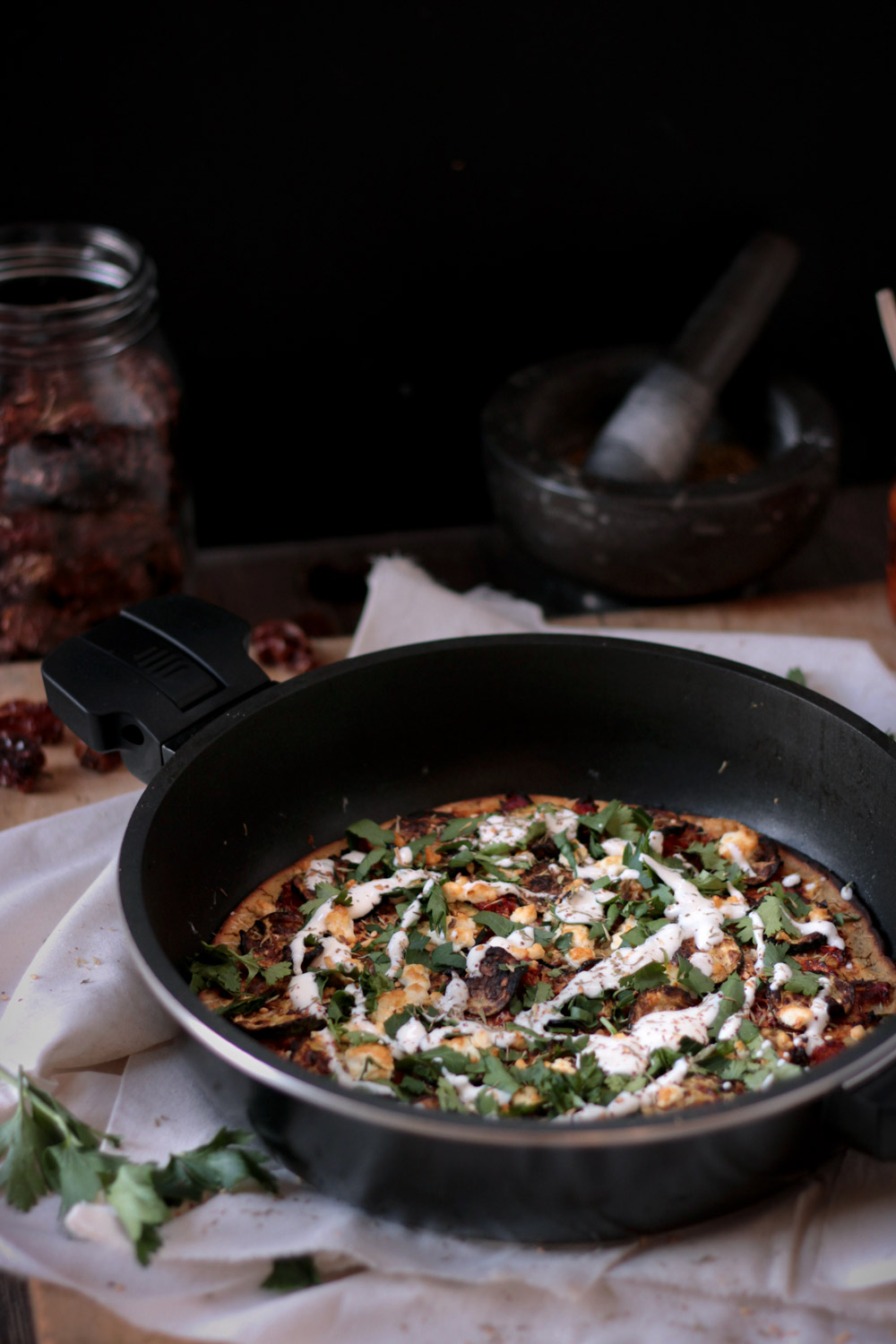 A good quality pan here is key in ensuring that the socca base cooks evenly. I cooked mine in my new Bessemer frypan, which worked perfectly. I was lucky enough to be sent some Bessemer products to try out late last year, and they have quickly become some of the stars of our new kitchen. In all honesty, I must admit that I am usually quite hesitant about receiving free products via the blog. I hate the idea of the product being a dud, then being in the predicament of feeling like I had to lie on here and encourage you to buy or even consider a product which is substandard – which for the record I would never do. So when I was contacted by Bessemer – a company I had never heard of before – I was initially going to decline. That was until I mentioned it to my mother who continued to tell me that her beloved set of bright orange cookware which cooked nearly all of the meals I enjoyed throughout my childhood were in fact Bessemer products.  I swallowed my reservations, and accepted the offer the next day.

And I must say I am extremely happy that I did – I didn’t realise the difference that cooking in good quality, heavy, cookware would make as opposed to the mostly thin, metal pots and pans I had accumulated over my years of living in sharehouses. We have been cooking curries and porridge in the new casserole dish on the stove top, and just when we thought B’s best ever chips couldn’t get any better, we baked them in the oven proof pan to amazing results – super crunchy, golden edges with perfectly cooked-through centres. Another plus of the frypan is that the handles are interchangeable and removable, which is perfect when transferring items – like this pizza – from the stovetop to the oven.  Based on my experiences so far, I would not hesitate to recommend any of these products, and look forward to expanding my own range over the coming years. 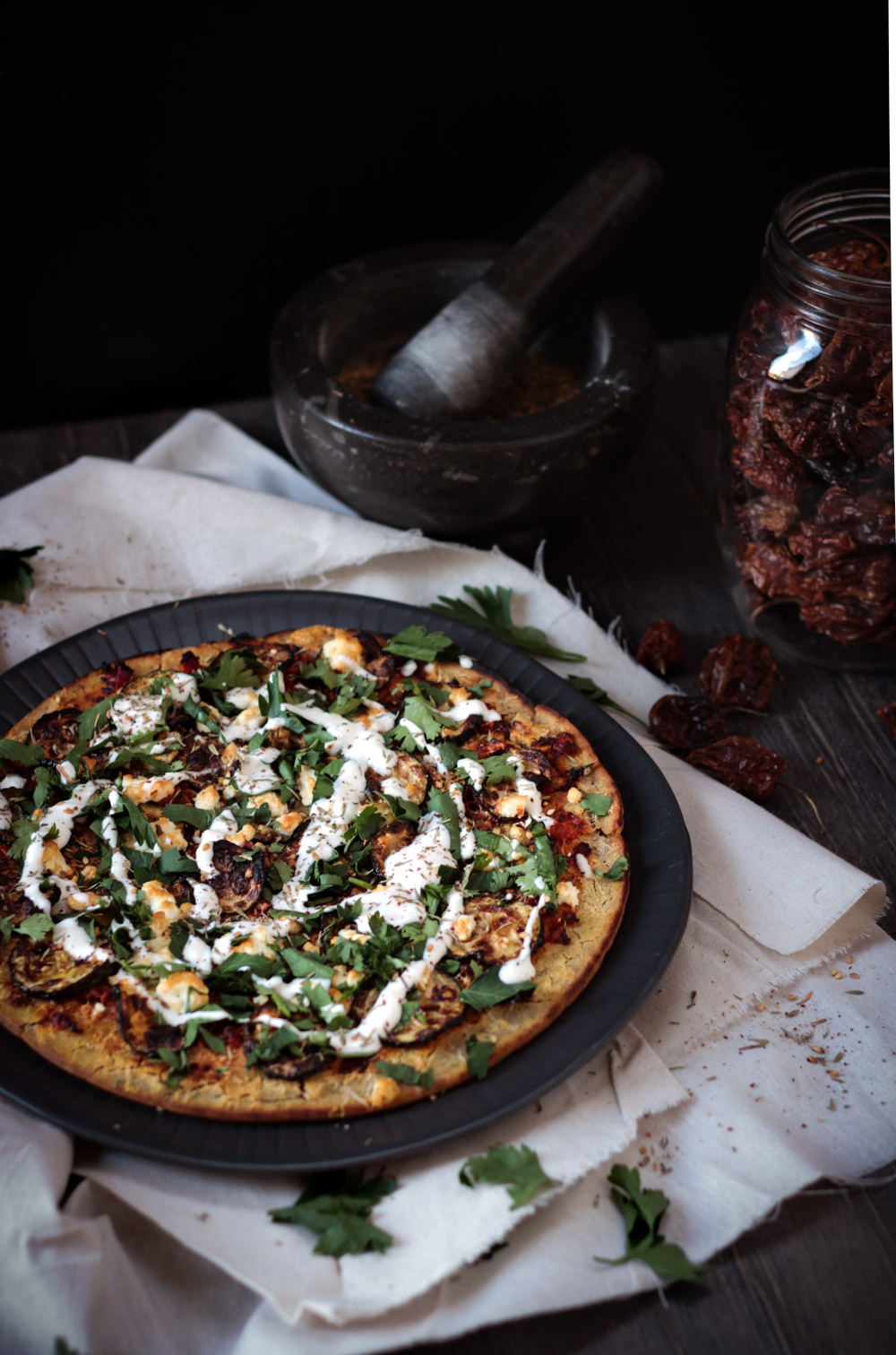 *As mentioned above, I received three Bessemer products free of charge which were used to create the recipe in this post – however, as always, all views and opinions are my own.